Attendees at IBC Get the Scoop on LTO-7 Specs

The LTO Program sponsored a presentation booth at the recent International Broadcasters Conference (IBC) in Amsterdam,  Netherlands, and attendees were in a fever pitch for the news about LTO-7 specifications.  On September 14th the LTO technology provider companies announced the availability of the LTO-7 specifications, which top the charts!

The LTO Gen 7 specifications more than double the tape cartridge capacity from the previous generation. LTO-7 has capacity of up to 15TB per cartridge compressed and that’s not all. LTO-7 tape drives boast data transfer rates up to 750MB per second compressed.  This translates to more than 2.7 terabytes of data an hour per drive. Unbelievable! Let’s look closer.

A Close Look at Gen-7

times the capacity of an LTO-5 cartridge. That’s right, the data on up to four LTO-5 cartridges can fit on one LTO-7 cartridge. So, if you are in need of more long-term secure storage and are using LTO-5 or 6, you can significantly impact your storage infrastructure by moving to Gen-7. That’s a fantastic ‘do more with less’ strategy. You can also impact your job productivity because the native data transfer rate is a sizzling 300 megabytes per second! That’s fast…nearly twice the data rate of LTO-6 drives.  How were these impressive specs accomplished? LTO-7 employs a 32 track head instead of 16 tracks, and has an advanced servo format and improved error correction code (ECC). The enhanced ECC allows for more tracks and increased linear density (more bits per inch). These enhancements improve the bit error rate from the existing and notable 10E17 to a remarkable 10E19 for outstanding data integrity.

Danes Make Use of LTO Technology for Film Archive

The Danish Film Institute (DFI), Denmark’s national agency for film and cinema culture, is digitizing petabytes of film history to LTO tape to create a trusted digital repository for all of their assets. Tommy Christianson and Jacob Trock from DFI had the chance to discuss the benefits of moving up to LTO-7 technology with LTO Program representative, Chris Martin (Figure-1) at the IBC event.

Getting to Gen-7 Can Be a Simple and Smart Move

The transition to LTO-7 from gens 5 or 6 is simplified because an LTO-7 drive can read and write LTO-6 cartridges and can read LTO-5 cartridges.  This compatibility between generations helps to protect investments, while making the transition from one generation to another a simple process.  LTO-7 continues to include features that were introduced in previous generations, including the partitioning functionality that allows users to present a tape-based file system with the use of the Linear Tape File System (LTFS). LTO Gen-7 continues the support for hardware-based encryption and WORM functionality to help address security based policies. 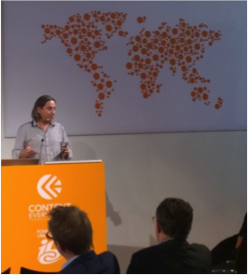 LTO technology and the advancements of LTO Gen-7 can benefit massive data repositories, including cloud implementations, on premise, off-premise and public implementations.  Ramy Katrib, CEO of DigitalFilm Tree, a post-production, creative, consulting, and software development company, presented how they have implemented LTO technology with the file system capabilities of LTFS for a variety of benefits including their cloud application (Figure-2). DigitalFilm Tree found major benefits by migrating certain assets from tape to cloud storage and from cloud storage to tape. Utilizing metadata, they established workflows for clients to access their proxy files from cloud storage, as well as the associated high-resolution files living on tape.

When Can You Order LTO-7 Products?

If history repeats itself, offerings typically become available from LTO product providers 3 to 6 months after the availability of the specifications are announced.   With the continuing advancements in data storage density exhibited by LTO technology for low cost, secure, long term storage, benefits can extend to everyone from the data storage IT professional to the CIO, CFO and CEO.